Christopher Bolte is a music producer, bass player, audio engineer, and sound designer born in the region of Niedersachsen – Germany and currently based in the greater Boston area who has dedicated his life to the creating music.

Chris studied Jazz at the Institut für Musik in Osnabrück Germany as well as Music Production and Electric Bass Performance with a generous scholarship at the famed Berklee College of Music in Boston Massachusetts. Among his teachers were many bass heavyweights including the late Victor Bailey, Victor Wooten, Oscar Stagnaro, John Patitucci, Lincoln Goines, Joe Santerre and many others. 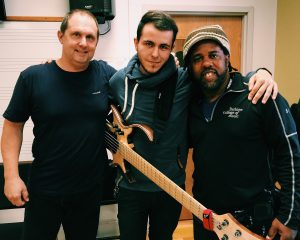 At Berklee with Joe Santerre and Victor Wooten

He feels at home in almost any style of music one can think of and has worked with dozens of musicians of all varieties. His playing style, distinctive tone as well as his very diverse technique let the Bass speak in a unique way.

Born in Bückeburg – Germany in 1992, Christopher started making music at the age of 4 and had his first music lessons (including musical pre-school and Keyboard lessons) at 5 years of age. Soon, inspired by the opus "Picturs at an Exhibition" by late romantic composer Modest Mussorgsky, he realised that he wanted to compose his own music and began aspiring to be a professional musician as early as age 11.

He then picked up and learned to play the Drums and the Guitar until he found his main instrument: The Electric Bass which he started playing at 14. Since then, a lot has changed. Over 400 concerts with crowds counting up to several thousands of people, endorsement deals with 9 international music equipment companies and a substantial scholarship at Berklee College of Music that enabled him to study with some of the industries leading professionals. 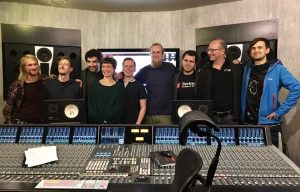 One of the most notable projects that Chris has recorded and toured with is Polish singer Natalia Mateo whose second album "Heart of Darkness" was released in March 2015 on the world renowned European Jazz label ACT Music + Vision and won the 2016 ECHO JAZZ award in the category "Best Newcomer". They went on to create a total of 3 studio albums together where Chris not only played bass acted as producer and editor as well.

Since moving to the USA in 2018, Chris has worked with numerous international artists as a producer and audio engineer, created sound packs and sample libraries that have been downloaded over 4000 times globally, and has had his worked featured on numerous radio A-lists, editorial playlists, and international airplay charts. A recent reimagining of the Culture Club classic "Do you really want to hurt me" with artist Tyler Christian has received praise and promotion by Boy George and Culture Club personally.